Tokyo – November 27, 2021 – Nikkei Woman, a women’s career and lifestyle magazine published by Nikkei Business Publications (President & CEO: Naoto Yoshida; Minato-ku, Tokyo) announced the winners, eight groups of nine people, of its Woman of the Year 2022. The Award is to honor accomplishments of women who showed outstanding performance in various quarters.

Mses. Mizuki and Anna Nakajima are twin sisters who founded coly Inc. in 2014 and achieved its listing on TSE Mothers in February 2021. In the smartphone game market where over 90% are targeting men, coly develops content narrowing down a target to women. Its stories and characters that create positive mood for women have gained popularity and the released titles became a hit one after another. The company succeeded to grow the sales by approx. 50 times in the recent five years, making a foray abroad and also launched “MO inv. (MO investment)” a team that invests in women and young entrepreneurs to support their business in August this year. Achieving its own growth in the competitive entertainment universe, they are recognized that their attitude of returning the profit to the next generation embodies a new-type of entrepreneurial icon. 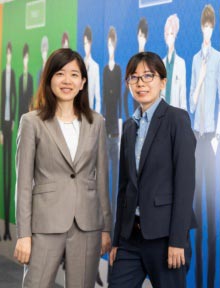 Ms. Mizuki Nakajima (right) and Ms. Anna Nakajima (left) won the grand prize of “Woman of the Year 2022”
The other recipients are as follows.

Ms. Akiko Iwasaki, Professor of Immunobiology at Yale School of Medicine
She has made worldwide achievement in the Covid-19 research and contributes to communicating accurate information.

Ms. Satomi Hirasawa, Director of the Board, Director, Photosensitive Materials Division, TOYO GOSEI CO., LTD.
She built a career by leveraging her involuntary resignation and has been leading the core business of the world’s top-share company in semiconductor materials.

Ms. Shinobu Fujisaki, President of DOMDOM FOOD SERVICE Co., Ltd.
She became a president of the long-established hamburger chain after joining the company at 51 years old as a former fulltime housewife graduated from junior college, and achieved profitability.

Ms. Mari Sakuramoto, CEO of cotree Inc., CEO of CoachEd Inc.
She provides online counseling to people having anxiety or trouble and gives consideration to approx. 50,000 people for their mental troubles.

Ms. Ai Taguchi, CEO of Mpraeso
She is a university student entrepreneur who went to Ghana alone to negotiate with the government, aiming to solve poverty issues through cacao business.

Ms. Akira Sakano, Representative Director of Zero Waste Japan
She is a leader of the environmental problem solution that evolved “zero garbage” activities in a small town in Shikoku and took it to the level attracting the world’s attention.

It is an annual award presented since 1999 and now is in its 23rd year. Nikkei Woman has been supporting working women since it was first published in 1988. Through its Women of the Year Award honoring the accomplishments of outstanding women in society, the magazine will continue to support and motivate working women for the next generation. The profiles of winners and details on the screening process and results are posted on the January issue of Nikkei WOMAN on sale from December 7, 2021.